Nitride semiconductor nanowires show strong piezoelectric properties which can be exploited for different applications. Mechanical energy harvesting with nanowire piezogenerators, i.e. conversion of the ambient wasted mechanical energy into usable electrical energy, appears as a promising way to fabricate portable power supplies for low-consumption microelectronic devices. The extreme sensitivity of the nanowires, to the applied force is an advantage for the detection of small transient deformations. Thanks to their wide bandgap, nitride nanowires can successfully respond to the need for sensitive solar-blind UV photodetectors. Nitride nanowire photoconductors exhibit a very high sensitivity thanks to their high photoconductive gain. P-n junction photodiodes have a lower sensitivity, but a faster response.

Development of wearable UVA sensors operating without external polarization is today an important societal challenge. In addition to high sensitivity and spectral selectivity, wearable UV sensors need to be lightweight and flexible in order to be easily incorporated in skin patches or integrated on clothes. Autonomous operation without external bias is also an important requirement for this application. We demonstrated flexible nitride nanowire p-n photodiodes selectively detecting UVA radiation. The device consisted of a composite nanowire/polymer membrane transferred onto a flexible substrate. Fully flexible transparent contacts based on a silver nanowire network were used for device fabrication, which allows bending the detector to a few millimeter curvature radius without damage. The detector showed a photoresponse at wavelengths shorter than 430 nm with a peak responsivity of 0.096 A/W under zero bias. 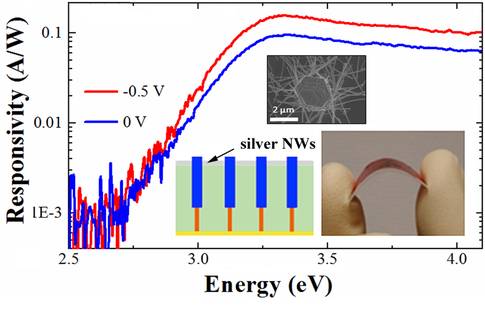 The integration of graphene with one dimensional semiconductor nanostructures has attracted a strong interest. The main benefits of graphene transparent contact are its enhanced transparency and high conductivity. These properties are of particular importance at short wavelengths, since there is a lack of transparent conductive materials in the ultraviolet spectral domain. We have demonstrated GaN and ZnO nanowire ensemble photodetectors using CVD-grown few-layered graphene as a transparent electrode. The optimization of the transfer method allowed to form a continuous contact to the nanowires over a large area. A responsivity up to 104 A/W was achieved for ZnO nanowires.

To increase the operation speed of the NW photodetectors, the device architecture can be changed from a photoconductor to a photodiode. We investigated p-n junction photodiode having both axial and core/shell geometries. A very high photoconductive gain is observed in NW photocoductors due to the radial carrier separation induced by a surface band bending. This leads to a high response, but a slow operation. For axial p-n diodes, the photoconductive effects in the NW extremities still persist, which together with a non-negligible leakage leads to a slow operation. The problem of the influence of the surface can be solved in radial p-n junction diodes.

We demonstrated the first piezo-generator integrating a vertical array of GaN nanowires. A systematic multi-scale analysis, going from single wire properties to macroscopic device fabrication and characterization, allowed to establish for GaN nanowires the relationship between the material properties and the piezo-generation and to propose an efficient piezo-generator design. The device consists of nanowire arrays of several square millimeters in size embedded into spin-on glass with a Schottky contact for rectification and collection of piezo-generated carriers. The generator delivers a maximum power density of ∼12.7 mW/cm3. This value settles the new state of the art for piezo-generators based on GaN nanowires and more generally on nitride nanowires, and offers promising prospects for the use of GaN nanowires for high-efficiency ultra-compact energy harvesters.