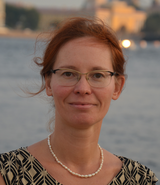 Maria Tchernycheva was born in 1979. She graduated from Ecole Polytechnique (X98) and then received her PhD in physics from the Université Paris Sud in 2005. In the same year, she joined Laboratory for Photonics and Nanostructures, CNRS, Marcoussis as a post-doctoral researcher. Her work was focused on the fabrication of III-V and III-N semiconductor nanowires by molecular beam epitaxy. In 2006, she joined CNRS at the Institut d’Electronique Fondamentale of University Paris-Sud in Orsay. She is currently working as directrice de recherche CNRS at Center of Nanosciences and Nanotechnologies in Palaiseau. Her activities focus on the fabrication and testing of novel optoelectronic devices based on semiconductor nanowires. The main research topics include the development of nanowire flexible light emitting diodes, solar cells and piezosensors. Maria Tchernycheva has published more than 120 peer-reviewed articles in international journals. She received the Madeleine Lecoq award from the French Academy of Sciences in 2006 and she is a laureate of the ERC starting grant 2014.